Helping you improve your profitability in mixing and placing
self-levelling compounds: detailed tutorials, case studies and
articles from compound manufacturers and installers alike.

What's the difference between a forced action mixer and the Mega Hippo?

We often get asked, "What is the difference between a forced action mixer and the Mega Hippo?"

Well, the forced action mixer is really as its described, the canister, or pot as some call it, remains stationary, and the blade or paddle rotates around inside, forcing the mixture around.

The forced action mixer, or SoRoTo Mixer as it is often known by, stirs at a much slower rate than the Mega Hippo.

It is designed to lift and fold the material as it stirs. It is often used for the heavy, low-slump mortars and grouts.

We highly recommend using these the SoRoTo Mixer for highly viscous and trowelable materials. 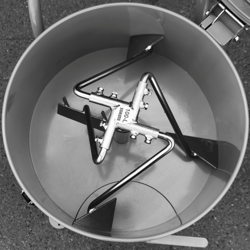 How is the Mega Hippo different then?

When mixing with the Mega Hippo, the canister remains stationary, and the mixing helix or paddle spins, mixing the product.

The paddle is spinning a lot faster than the blade of the SoRoTo Mixer as some products need a much higher mix rotation speed.

Materials like self-leveling underlayments, decorative overlays, epoxy coatings need a "beating" action to release the polymers, so the product

Another difference between the Mega Hippo is its ability to transport and pour at the same time. does what it is designed to do, self-level. 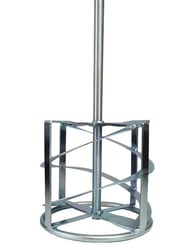 Does the material you're mixing require speed or force to be mixed correctly?

While there are other differences between these types of mixers, the critical point is to ensure you choose the right mixer for your application.

If speed is the answer to the question of, "Does the material you're mixing require speed or force to be mixed correctly?" then check out the Portamix Mega Hippo for the perfect mix on your next project.